on April 25, 2013
Targeted and complex malicious software has seen a significant increase in infection rates since 2007 according to Fireeye's Alex Lanstein.  "Since the US Air Force used the APT label to describe specifically Chinese origin attacks, multiple variations, from different geographies are now common place".

Malware Occurrence & Complexity On The Rise

The occurrence and complexity of malicious software has lead to numerous significant breaches.  Powerful state sponsored and organised crime lead groups, have developed powerful automated ways of generating sophisticated, hard to identify, track and block, malware payloads.  Many payloads are now masked as basic everyday application files such as PDF's, Word and Excel documents and images, whilst underneath, harbour well crafted executables, that can seamlessly connect to multiple remote command and control servers.  These command and control servers are often accessed through intermediary instruction sets, distributed via well known domains such as Twitter, Yahoo and Wordpress blog sites, that wont look suspicious to organisational outbound traffic analysis tools.  The instruction sets are often encrypted, or at least masked as base64, to prevent detection. 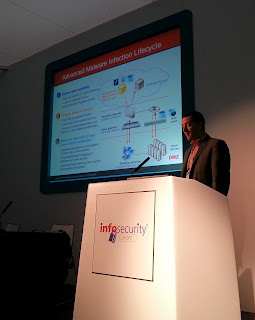 As anti-virus and signature based scanning tools become more accurate, malware designers are leveraging the human factor as a means of entry into an organisations network.  By identifying  key employees via social media tools such as LinkedIn and Twitter, malware payloads are delivered directly to an individual via spear-phishing techniques.  Basic social framing such as good-news stories or studies looking for work placements or advice are typical according to Lanstein.

Many of the payloads being delivered are being manufactured using small utilities to help create a 'factory' of malware operators who can quickly craft a malicious document or image in minutes.  These payloads are created specifically for individual organisational targets, with subtle differences and nuances, in order to look realistic.

The Human Element Behind APT

The human element is not to be overestimated in the entire APT food chain.  Whilst the payloads are technical in nature and command and control centres allow for hundrads if not thousands of remote bots , human decision making, framing and social engineering are playing a large part in overcoming first line defences.  As technical protection gets better, the human factor at both the malware operator and target level becomes ever more important, with increased awareness and training a key tool in malware defence.